Stanmore is part of several 1790s land grants to George Johnston. Johnston named his property, bounded by Johnston and White's creeks, spanning the "High Road", now known as Parramatta Road, down to the harbour Annandale after his home in the Dumfries in Scotland.

When George died, a bit rangle ensued between his second son Robert and the widow Ester Abrahams. Robert continued to farm the property, saw the Railway line pass through the estate and later began to subdivide North Annandale, across the Parramatta Road, in the 1870s...more

Annandale House was located in the vicinity of Macaulay St, Albany St, Darley Rd and Percival Road in Stanmore. It was demolished in 1905. more.

When the house was demolished, it was found to have been constructed of cedar, a prize timber. This timber was probably growing within a mile or two of the location of the house. The Johnston's planted Norfolk Island pines to replace the cedar. The cedar rafters, joists, "other scantling" and joinery had been cut with an adze [a tool used for smoothing or carving rough-cut wood in hand woodworking.] as there weren't many saw-pits at the time. Reference: 1914 'PROGRESS OF THE SUBURBS.', The Sydney Morning Herald (NSW : 1842 - 1954), 14 March, p. 8, viewed 6 March, 2013, http://nla.gov.au/nla.news-article15469221 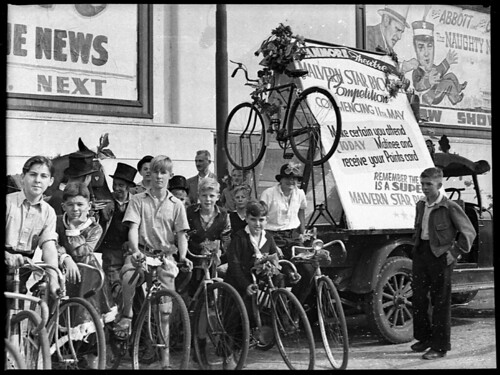 More about the Stanmore Theatre

The Olympia was built in the 1930s...street view and interior

"Sth Annandale" Tram on Parramatta Road, in front of Olympia Theatre, just past intersection with Johnston Street (VW Combi parked on Annandale side of Parramatta Road outside the Goodman buildings): photograph

Janet Fossey: "The paintings are mixed media and collage with acrylic on canvas. Most are approx. 40 cm x 50 cm, or 50 cm x 60 cm. In creating them over the past few months I have chosen the freedom of an abstract and expressive approach, while observing, enjoying and learning about Sydney Park."

Paintings are for sale and net proceeds will go to the EDO, NSW—the Environmental Defenders Office, which does their vital work with no government funding. Current cases involve everything from heritage listing for the Sirius building to protecting endangered species, to keeping coal mine discharge out of Sydney’s drinking water catchment.

This page www.ramin.com.au/stanmore/history.shtml last updated 12 May 2017.