Annandale on the Web

Promoting Annandale on the Internet since 1998

"Mrs Elizabeth Curley was a skilled ‘needle woman’ who also used the 1908 Beale sewing machine contained within the cottage, to sew most of the family’s clothing, including Ada Curley’s riding habit." - http://www.museumsandgalleries.act.gov.au/mugga/virtual_tour/html/adas_room_sewing_machine.html

In Melbourne, Beale worked for Hugo Wertheim, who imported sewing machines, bicycles, pianos and other mechanical devices. Wertheim had a 25% share of Beale's later Qld Business...more

Wertheim had Agencies throughout Metropolitan and country Victoria, Queensland and South Australia. The omission of N.S.W. was due to an agreement with Octavius Beale who distributed the Wertheim sewing machines in that State...HUGO WERTHEIM'S SEWING MACHINES & HAPSBURG PIANOS

In 1884, Beale moved to Sydney, and established Beale & Co, piano and sewing-machine importers and later manufacturers...more.

Jennifer, emailed that her great-grandfather was the Vader in the Beale-Vader tuning system and her mother lived at Ruthville, in Johnston St, next door to their good friends, "the Winkies" (the Winkworths).

Ruthville is listed in the Annandale Association Register of Buildings at 39 Johnston Street.

The Beale Piano factory was opened in 1902 by Sir Edmund Barton, Australia's first Prime Minister. Beale and Co were the first to produce Veneer in Australia.

ILLUSTRATIONS of MAIN BUILDING, TRAFALGAR STREET and VIEW PROM MAIN BUILDING.
BEALE'S PIANO FACTORIES, ANNANDALE. FIRST AND ONLY IN AUSTRALASIA.
The Actions are all made by Isermann, of Hamburg, the leading maker of Germany. We manufacture more of the constituent parts of a plano than any piano maker in Europe. We have our own iron and brass foundries, drying kilns, mills, iron shops, and all else complete, at command. The various departments are driven by steam and electricity. Electric light throughout. The most modern plant and installation in the trade. We have been granted, throughout the world, patents for serious improvements in vital portions of the construction.
"THE MUSIC TRADE REVIEW" of NEW YORK, "THE MUSIC TRADES' REVIEW" of LONDON, and "COMMERCIAL INTELLIGENCE," all of them trade authorities, say that "Messrs. Beale and Co. have Large Pianoforte Manufactories near Sydney, and find their Goods Command a Sale as ready as that enjoyed by Importations from Europe or America. The More Delicate Pieces of Mechanism are Imported. The Employees are Chiefly from Great Britain or Germany, and earn good wages."
That is true, as far as it goes, but is not strong enough. Beale and Co. distribute £ 30,000 every year in wages. - 1902 'Advertising.', Australian Town and Country Journal (NSW : 1870 - 1907), 3 May, p. 41, viewed 23 November, 2011, http://nla.gov.au/nla.news-article71523604

Beale introduced the all-iron tuning system, for which a patent was granted in 1902. This tuning system was referred to in earlier Beale pianos as the "Beale-Vader tuning system". - Wikipedia. Though the plate affixed to a "Beale Patent Drawing Room Semi Grand" indicates it was the Beale-Vader Wrest-Steel-Plank that was Patented throughout the world.

VICE-REGAL VISIT TO BEALE'S FACTORY. (See illustration on page 37.)
The Governor-General and Lady Northcote paid a visit last week to Messrs. Beale and Company's, pianoforte faotory at Annandale, near Sydney. Under the guidance of Mr. O. C. Beale, the vice-regal visitors, who were accompanied by Mr. H. Share, R.N., private secretary, Inspected the Iron foundry, the brass and gun metal work shops, the mills and veneer shops, and the main factory, where are included the cabinet making shops and all the various departments devoted to the actual work of pianoforte con struction. - 1905 'VICE-REGAL VISIT TO BEALE'S FACTORY.', Australian Town and Country Journal (NSW : 1870 - 1907), 7 June, p. 24, viewed 20 October, 2011, http://nla.gov.au/nla.news-article71503117

"By Royal Letters Patent
Made in Australia,
With Beale-Vader Patent Iron Wrest-Plank
DURING THE WHOLE HISTORY OF PIANO MAKING STRENUOUS EFFORTS HAVE BEEN MADE TOWARDS ATTAINING PERMANENCE IN PITCH AND TUNE. NUMEROUS ATTEMPTS HAVE BEEN MADE TO DEVISE AN IRON WREST PLANK (OR TUNING-BLOCK) TO FORM PART OF THE USUAL IRON FRAME, AND INTO WHICH THE WREST (OR TUNING) PINS COULD BE SO PLACED THAT THE IRON STRUCTURE WOULD TAKE UP THE WHOLE STRAIN OF THE STRINGS. IN GERMANY. AMERICA, ENGLAND, FRANCE, AUSTRIA-IN EVERY LAND WHERE PIANO ARE MANUFACTURED -DEVICES INTENDED TO SUPPLY THIS WANT ARE PATENTED ALMOST EVERY WEEK. BUT NOT ONE OF THESE ATTEMPTS HAS PROVEN ENTIRELY SUCCESSFUL, AND THE FACT REMAINS THAT BY ALL MAKERS, OTHER THAN OURSELVES, THE WREST-PLANK IS MADE OF WOOD...." - 1907 'Advertising.', The Advertiser (Adelaide, SA : 1889 - 1931), 2 February, p. 13, viewed 4 November, 2011, http://nla.gov.au/nla.news-article5054513

Tuning the only pianos ever made without a timber pin block!

1907: "In other constructions where a metal plate is used, the pins often break due to seizure in the plate especially if the time between tunings is long. The pins can also bend about the stress point when being tuned and set for example, of the Beale and Vader type as described in the Australian patent application 8777/07 filed the 22nd May 1907." - http://www.patentstorm.us/patents/5471902/description.html (viewed 4 Nov 2011)

ca2016:"for the piano tuner who turns up to the customers house and is confronted with an early Australian Made Beale that hasn’t been tuned in years & some cases 40 / 50 years then you can have a complex task on your hands..https://brunswickpianos.com.au/tuning-austalian-made-beale-piano/

Perth Branch and Marketing to the World

BEALE PIANOS Awarded the GRAND PRIZE "for tonal qualities and general excellence," FRANCO-BRITISH EXHIBITION, LONDON, 1908. ... Recently we took the highesttaward-the Grand Prize and three gold medals at the France-British Exhibition, for fonal qualities, woodwork, metalwork, inventions, and factory organisation. We invite you to come and inspect the Beale Pianos at any time; or we shall be pleased to send you our catalogue and full particulars. Remember that in buying a Beale Piano you are buying direct from the makers, saving all middlemen's and agents' profits, and 25 per cent. duty into the bargain. And you are pbtaining the most durable instrument in the world, with musical qualities second to none. Beale and Co., Ltd.. 837 Hay-street, in His Majesty's Theatre Buildings. - 1910 'Advertising.', The West Australian (Perth, WA : 1879-1954), 19 February, p. 11, viewed 9 June, 2011,http://trove.nla.gov.au/ndp/del/article/26249845

"The new Strand Palace Hotel, London, is the most conspicuous success of the world's metropolis. Only Beale Australian pianos are used in this gorgeous caravansera... In the grand concert hall the famous Coldstream Guards Band performs every day to the accompaniment of a Beale Piano " - 1910 'Advertising.', The West Australian (Perth, WA : 1879-1954), 10 February, p. 5, viewed 9 June, 2011, http://trove.nla.gov.au/ndp/del/article/26249062

Photographs of "By Royal Letters Patent Lion & Unicorn Crest Dieu et Mon Droit Made in Australia....Exhibition LONDON MDCCCVII" Crest, "How to Preserve the Piano for a Lifetime Instructions inside a Beale Semi grand Piano", "Beale Patent Sydney Drawing Room Semi Grand", Keyboard and Hammers, were taken in Perth in April 2011.

"Beale and Co. design their own frames,. calculate and set out on plan the scale, this being one of the most difficult and technical departments of piano manufacture, requiring exceptional skill and training, make their own patterns, and cast the frame, together with the metal parts, including even the candelabra, handles, and castors, in their own foundry. Their patented tuning system, whereby the troublesome wooden wrest-plank is eliminated, is of special interest. The company's manager states that there are over 300 skilled artisans employed at the Annandale factory, the total employees num bering upwards of 500." - The West Australian Wednesday 11 October 1911

"The range of trades incorporated into the Annandale factory was astonishing and the craftmanship second to none. Frames were hand strung with minute attention to coil spacing and string angle." -BealeHistory

Picture Australia images of veneer and plywood logs being unloaded from barge.

During 1998, the building underwent major renovation, which has transformed it into a residential complex. See "Piano factory, heritage report", 1997, prepared by Robert irving for Walker Corporation. Available in the local studies collection, Leichhardt Library.

The National Library of Australia, has a Beale catalogue published around 1903: Piano Catalogues: A Window Into Industry, Trade and Australian Social History. Photographs of the exterior and operations of the Beale Piano Factory at photosau.com

Beale Bijou Piano at the ANU for O-Week 2017 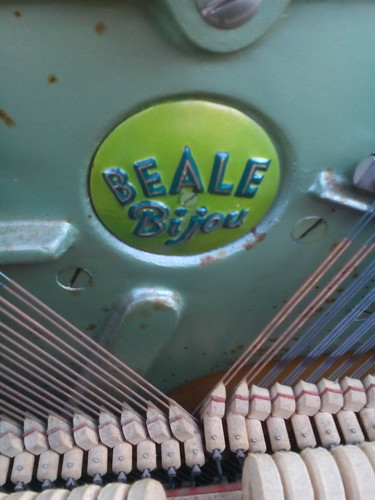 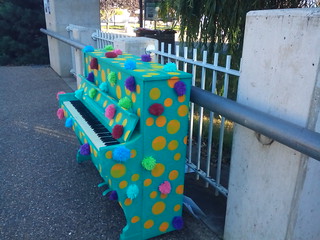 Where are Beale Pianos Now?

In June 2011, Beverly wrote from Melbourne: 'Under the Keyboard:- "Austral Queen" Upright Grand. Manufacturer's Patent:- "The Beale-Vader", Steel wrest-plank, patented throughout the world. Beale-Vader emblem on the key to lock keyboard lid. Steel framed, at the bottom of the frame is a number 8368 I found another which I think is the serial number 18574, on both sides of the piano where the top lid sits on.Piano key are lovely and white, haven't turned yellow.'. A serial number of 18574, indicates the piano was manufactured in 1908.

"Messrs. Beale and Co., Limited, of Trafalgar street, Annandale, have an attractive exhibit, including five of their patent steel wrest-plank pianos. The instruments are exact reproductions of those exhibited at the Franco British Exhibition, where they Bocured the Grand Prix (the highest possible award) for tonal qualities and general excellence, gold medal for "perfection of woodwork," and gold modal for "Inventions." The pianos wero constructed at Annandale, Sydney, by Australian workmen from Australian materials, and are specially built to withstand the severity of our Australian climate. Another feature of the instruments is the five-ply woodwork, which prevents cracking, splitting or warping." - The Sydney Morning Herald Tuesday 17 November 1908

I have recently restored a Beale player and they have no wooden pinblock. They use a system designed by Vader (German) which has a full cast plate and which is about 1" thick where the pins go. The pins have a 3/8" tapered section and are 1-1/2" long. They push in from the back and have a locking screw which locks the taper up. Unusual "Iron Tuning System" in Beale Piano By Peter Coggins

My great grand father was Johann Carl (Karl?) Vader and his birth was registered in Hamburg but that is not where he was born. We know he died in 1911 in Sydney Australia aged 51. It is believed he had an imput into the Beale-Vader piano...Genealogy of Vader family dating back to 1600 in The Netherlands

During a recent visit to Sydney the writer took advantage of an invitation to inspect the factories of that ' enterprising firm, Beale and Co., limited. Situated, in Trafalgar-street, Annandale, is the main building-a magnificent block-and at the rear are the drying kilns, foundry, timber sheds, timber machinery mills, iron shops, electroplating shops, and veneer rooms, the whole covering a floor space of about two acres. Australian timber is used-Castanospermum (Aus- tralian walnut) from the Richmond River. clear pine from Queensland, and other woods, all cut to specifications, and then seasoned in the kilns and drying sheds at Annandale. The company also design their own car- vings, which are executed entirely by hand by their own skilled artisans. -1907 'HOW TO MAKE A PIANO.', Sunday Times (Perth, WA : 1902 - 1954), 21 July, p. 3 Section: FIRST SECTION, viewed 5 February, 2012, http://nla.gov.au/nla.news-article57574804

A PIANO FACTORY ABLAZE.
Messrs Beale and Co 's piano and sewing machine factory, situated at Nelson-street, Annandale, was the scene of a destructive fire at an early hour this morning. The outbreak, which was confined by the Fire brigades in attendance to one branch of the premises, resulted in what is known as the mill department being completely destroyed. 1901 'DESTRUCTIVE FIRE AT ANNANDALE.', The Sydney Morning Herald (NSW : 1842 - 1954), 22 March, p. 5, viewed 5 February, 2012, http://nla.gov.au/nla.news-article14337921